AI: More Than Human is a new exhibition at the Barbican which promises an unprecedented survey of creative and scientific developments in artificial intelligence, and if we’re prepared to stretch our understanding of the term AI to encompass sculpture and images generated by neural networks, mythical creatures made of animated clay, geared mechanisms that encrypt messages. and anthropmorphic cooking tools then it certainly delivers.

The Curve exhibition space is so packed with artefacts, artworks and artificiality that it begins to overwhelm the visitor. It’s not surprising that one of the exhibits, programmed to tune in to faces in front of its camera, was apparently distracted by the images on the screens of other exhibits, as they are only partially hidden by the gauze screens that separate this rich and complex collection of thematically and chronologically ordered artefacts. 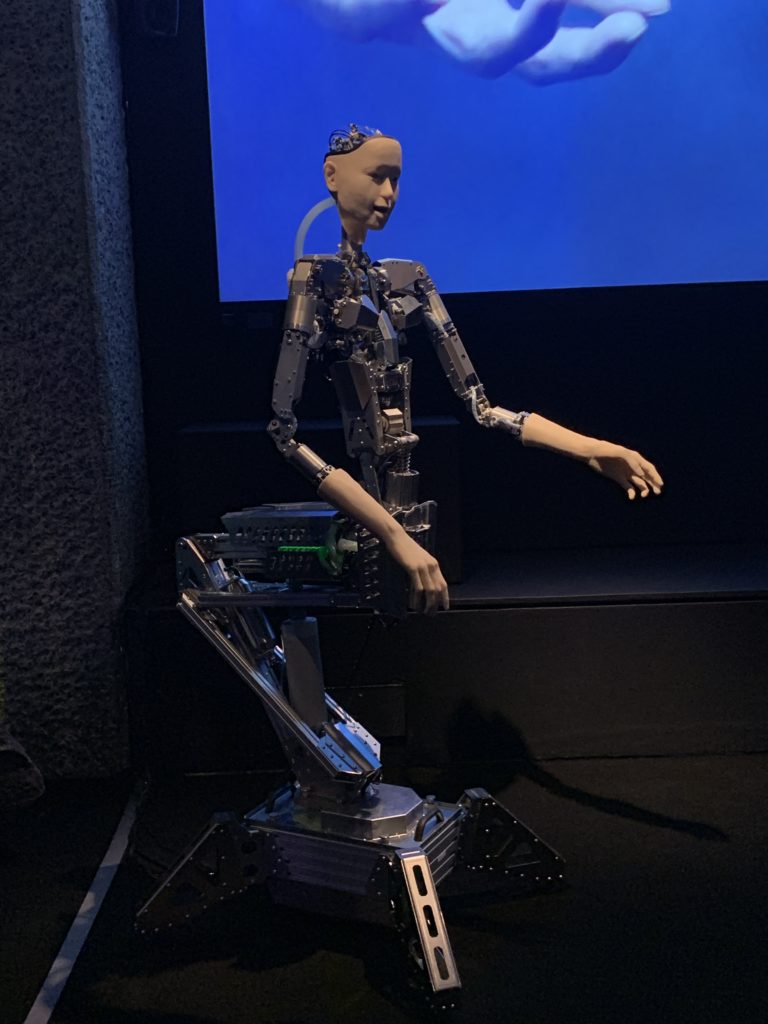 The Alter 3 robot is not alone in being not knowing where to look. As I walked through the space I was constantly distracted and diverted, turning from screen to object to interactive exhibit as I wondered exactly what story was being told here.

Was it the one offered in the catalogue, which promised to explore the relationship between humans and artifiicial intelligence, or was something more subtle going on – an attempt to expose the myth that underpins our current conception of AI in the world, fuelled as it was by SF tropes and PR hype? Were we witnessing a carefully constructed exploration of the limits of our achievement when it comes to building intelligent machines, dressed up as a celebration of cognitive computing and machine learning as only one step removed from Sirius Cybernetics and their the plastic pals who are fun to be with?

Surely the claim in the press release that ‘an age-old dream of creating intelligence has already become reality’ was an invitation to question how software that lacks agency and awareness could be considered sentient? Certainly nothing shown here stepped over the line between machine learning and applied statistics into the area of intelligence, and there was certainly no hint of the general intelligence that the Singularity hunters believe is just around the next cognitive corner.

That is not to say that this is not a fascinating, informative and vital exhibition. Curators Dr Suzanne Livingston and Maholo Uchid have assembled a remarkable collection of technologies that are central to the modern world and we should understand them all, from the Enigma Machine to Aibo to Deep Blue to AlphaGo, although there is nothing about sex or sex robots in this family-friendly show.

Complementing the historical and contemporary engineering, the artworks are superb, particularly Memo Atken’s generative “Learning to See”, Joy Buolamwini’s searing critique of biased facial recognition software “Gender Shades” and Mario Klingsman’s playful “Circuit Training’, where you allow photos of yourself to be used to teach a neural network how to make art – and give up all your data rights to your image in the process. 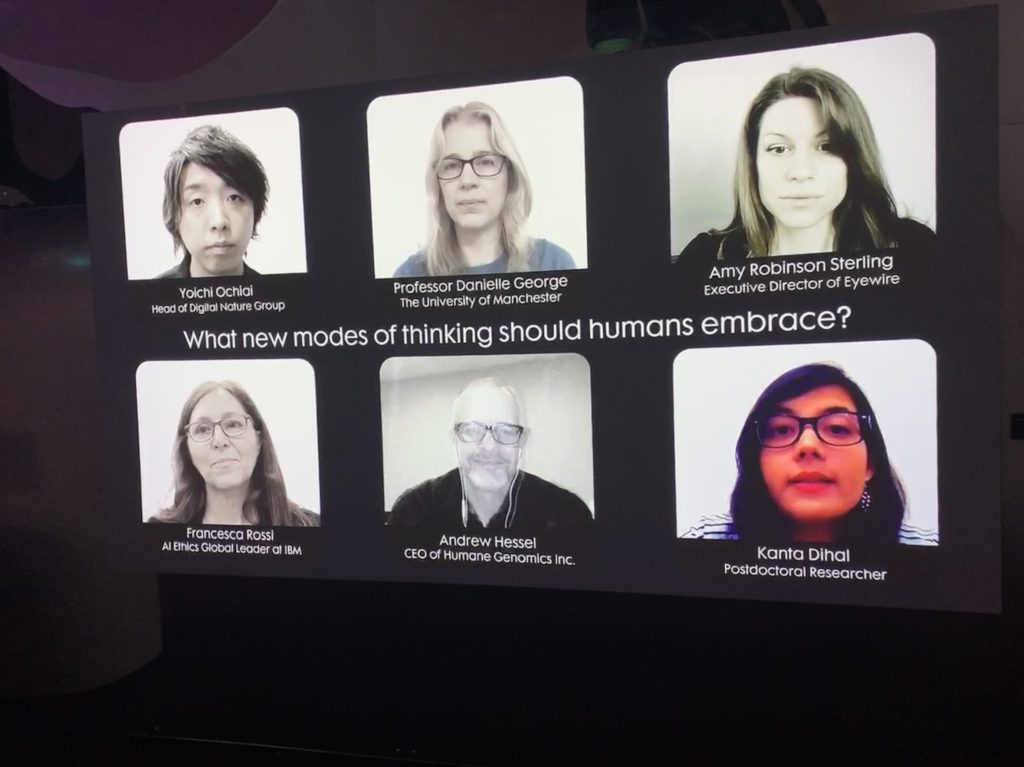 The explanations and background information are as good as you’d hope for, with a solid attempt to break away from the white male genius model of progress in the field, and anyone coming to the show with no prior knowledge will be engaged as they learn, better able to participate in the vital debate about how the many technologies currently mislabelled as ‘artificial intelligence’ and better called ‘applied statistics’ should be deployed in the modern world.

For despite the claim in the catalogue, AI is not ‘everywhere and nowhere’: it is nowhere, and nor is it imminent. However it is something we dream of and often believe in, partly because the narratives of AI are so prevalent in the arts – and the use of scenes from Blade Runner, Blade Runner 2049, and Her amplify this sense, even if the artworks counter the sense that thinking machines are nearly among us.

For me the key to the exhibition lies in one of the first works you will encounter in the Curve, an intriguing piece by Sam Twidale and Marija Avramovic called “Sunshowers”. It’s an animated piece developed in a game engine, exploring what happens in a Shintoist world where every object has a spirit and desires and needs, where animism rules and the universe is imbued with consciousness.

The scenario is loosely derived from the fox wedding scene in the film Dreams by Japanese director Akira Kurosawa. and each character on the screen has its own set of desires and behaviours, underpinned by parameters that define the game world as a whole. There are no human players, only the interaction of rule-driven avatars, each with its own set of behaviours.

Animism comes in to play because every object in the game world – the rocks, the bamboo, the plants – also has its own goals and behaviours, and these can be expressed by the spirit of that object which can manifest itself and affect what happens in the game world, interactng with characters and changing their ‘feelings’ (their settings) and future actions.

And this is how I read the whole exhibition, as a critique of our tendency to project agency and intelligence onto technologies that are really rather dumb, from Deep Blue to AlphaGo to Affectiva to the deeply disturbing Alter 3 robot flailing its arms at passers by in a vain attempt to pass as human.

Sunshowers offers a world where every object is imbued with spirit so that we can look at the rest of the exhibition and observe its absence. Instead of being duped by our innate ability to see mind and agency where it does not exist, to project sentience onto pets and laptops and machines, we can step back and see these assemblies of silicon, metal and glass for the constructs they are.

In the end, there’s nothing even remotely intelligent in the room, and acknowledging that might be the most important thing any visitor gets from this important exhibition.

But at least at the end you can get a pair of robots to make you a decent Negroni to soften the blow of discovering that that our artificial intelligences aren’t so bright after all.